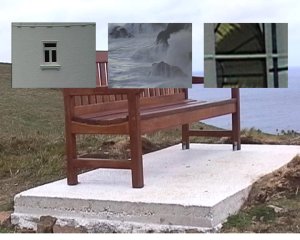 By filming a storm torn coastline from the vantage point of a memorial bench, Bill Wroath more than documented the environment by finding in the subject matter, poignant metaphors for the passage of life and our search for constancy in a hostile world. As the images appear and disappear on the screen they epitomise the act of living, of sex and death and the act of recalling.